The Role of the Plays in Vadi’s System

When working with Vadi, many people – especially those just starting out – often skip directly to the plays. In my view this gives the wrong impression of the system as a whole and misses the vast majority of interesting information in the system. Nevertheless, the plays are a significant and interesting part of his work. This article places describes how the section on the plays fits to the wider text, and proposes a theory for why we see these particular techniques in play form when others are described in the earlier chapters.

People often ask me how I can work with Vadi given how little longsword material there is. While it’s true that Vadi’s book is not huge (even in his dedication Vadi refers to it as a “little book”), this view is usually based on a misconception – that the 12 guards and 25 plays are the majority or even all of the longsword material. This is not helped by the structure of the Wiktenauer article, which places the written sections of Vadi’s book into separate parts titles “Preface” and “Introduction”. This “Introduction” is the source of the vast majority of material in Vadi (and, by Vadi’s own admission, is explicitly focused on the longsword). In my view, the verse section is by far the most important part of the book.

First of all, lets consider the entire of the unarmoured longsword material. There are several parts: a long written preface in prose, 16 chapters of verse describing a variety of topics, a “segno” page (an image of a man with various parts of the body linked to allegorical descriptions of its purpose, e.g. keys for the legs), a diagram that shows the cuts, 12 guards (each which has an image and 2 lines of text) and 25 plays (also an image with 2-3 lines of text). These sections vary greatly in length:

Comparing the numbers of pages isn’t necessarily the best way of comparing the amount of material. The prose is denser than verse, and images of course take up a comparatively large amount of room – but contain information that is very difficult to express in words. However, regardless of what weight you put on the relative medium for conveying information, the longsword plays make up approximately 1/3 of the written material on longsword, by page number. The verse sections and the plays together make up the vast majority of technical material, and so I’ll focus on those 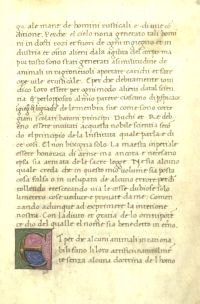 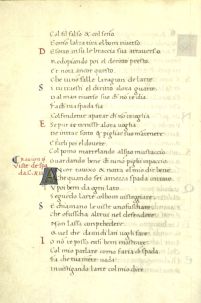 The verse and play sections are very different in content as well as structure. Where the chapters talk about tactics, principles and techniques across a range of different situations and topics, the plays each give us a quick snapshot of a particular situation with a brief piece of information about what to do. Tactics and principles are almost entirely absent from the plays section.

The two sections also in general cover very different topics. A common way of breaking up techniques in Italian swordsmanship is into “wide” (largo) and “constrained” (stretto). How exactly we should distinguish between these concepts is a matter of some debate, and it isn’t necessarily the same across different historical sources. Vadi uses these terms, but they don’t have the same fundamental role in categorising the system as they do in Fiore, and I think the way he divides actions between them is different to the earlier master.

In Vadi’s case, I would argue that stretto is any action where one or both fighters have physically “constrained” the opponent’s ability to move. Usually this is through grabbing or shoving any body part or even their sword, including throws or grabbing your own sword by the blade (this is known as “half-sword” in modern terminology, but Vadi uses this term to mean something else entirely, and so I won’t use that term to refer to this). Generally any of these actions are usually referred to in modern English as “grappling”.

One of the plays deals with a feint (play 20) and another with a mezzo tempo action (play 1). The remaining 23 plays are stretto actions. By contrast, very little of the content in the chapters deals with stretto.

In chapter 3 (Principles of the Sword) he provides a few verses on how to avoid stretto and when not to avoid it. Chapter 10 (Principles of the Half Sword) gives some general advice on how to position yourself to go to stretto  and in Chapter 15 (Theory of the Sword against the Rising Blow) he gives us a very specific setup for a particular play in the stretto section (although identifying which play he means is challenging). Chapter 13 (also titled Principles of the Half Sword) talks about closing to stretto to “finish off” your opponent and, finally, Chapter 11 (Principles of Swordplay) describes in detail a technique that is also present in the plays. In summary, the vast majority of the material that covers stretto is about when to close (tactics) and not what you do after closing (techniques). All remaining material in this section is about largo actions, using cuts, thrusts and parries at the right measure and angle to keep you safe while threatening your opponent.

While it varies greatly depending on the opponent, the different proportions of the book given to each type of action reflect – to my mind – the frequency with which they come up in combat, or at least in a sparring and tournament context. I am considered a decent and relatively frequent grappler, and have been complemented on a number of occasions by people I respect for by stretto play. Even with that, I’d say that exchanges end in a stretto action fewer than 1/6 times, although this may be more or less depending on my opponent. And even when it does, closing safely to stretto requires that you pass through largo actions without getting hit, so if you don’t have a good wide game, it doesn’t matter how good you are at grappling – you’ll never get to use it.

Focusing too much on the plays gives the wrong impression of Vadi. It creates a conception that the system is largely about grappling, where in fact this is really only one part of the system. The plays themselves do not give us any real understanding of the structure and nature of a sword fight, and provide little to no guidance on when we should apply them. Viewed on their own, the section is useless.

Now, having downplayed the importance of the plays section sufficiently, it’s time to emphasise just how critical they are. Put simply, if you don’t have an effective game to play at close distance, you have a serious hole in your system or understanding. Grappling tends to happen incredibly quickly and instinctively. In modern HEMA, most people fall back to whatever they knew before starting HEMA. Those of us who had no prior martial arts experience will generally freeze up the first time grappling occurs (if they haven’t trained it effectively).  If a person has prior experience in some form of unarmed martial art, they’ll generally fall back to whatever they learnt there. While something like BJJ or Judo gives you a good base for throwing the opponent, striking arts tend to not be very useful.

The majority of Vadi’s plays follow a handful of simple techniques to quickly end grappling. The important thing in all of them – and that distinguishes them from any unarmed martial art – is that the sword is still the key weapon even at close range. Vadi emphasises repeatedly that his system works against larger opponents, and the plays reflect this, as almost all of them work by providing a swift, simple and brutal way to end the fight quickly when you have reached this dangerous situation. As he says, speed and knowledge trump strength.

But why are these shown rather than described like the rest of the book? In short, the fast nature of grappling means that a visual explanation is significantly easier. I think the relative paucity of text in this section is also telling. Generally speaking, Vadi does not give us much – if any – information about how we would arrive at the situation where we would execute a particular play. In my mind, this is not an unfortunate lapse, but an intentional (or at least useful) omission; there are any number of situations that can lead to a particular crossing that will require a specific play. Indeed, when I teach the plays, I ask my more advanced students to come up with their own situation that would lead to each play. Each pair usually comes up with quite different (equally valid) options where a play might be used. In my view, each play shows a technique but also a general principle. Each play can have minor variations (e.g. the left hand grabbing the blade or the hilt), and fundamentally which play you execute will be dependent on the relative body and sword positions at the point you close. There will never be only one way in which you could arrive at a specific play. Even where Vadi does give us a specific opening, we should take this as an example of how you might get there, not the only situation that could lead to it.

The fact that the speed and difficulty of these actions has lead to images being used over text is also supported by the two non-grappling plays – the mezzo tempo action and the feint. While there are sections for both of these concepts, Vadi complains in both just how difficult it is to explain these types of action in writing. It’s arguable whether he has been any more successful with the image, but it does at least explain why he tried. The plays do give us some additional insights into how to interpret these chapters and should be viewed with the details in the chapters closely in mind.

So, in answer to the title question; the plays in Vadi are an essential part of the system, but they only cover a very specific area. Without this area, a martial artist using the longsword has a huge weakness, but on its own a skilled grappling game based upon Vadi’s plays alone will not be generally effective, at it needs to be situated within the wider context of his system that is described in the verse sections of his book. As a general rule with longsword, it doesn’t matter how good your grappling game is if you can’t effectively strike and parry, and even the most committed grapplers will still spend the majority of their time while sword fighting outside of a grappling situation.

Note: This article is part of a growing series of articles on the plays and my intepretation of them. It is intended in part as an introduction to my new page on Vadi’s Plays. This page is published as a work in progress and can be used to see information on how to execute these actions, but should be read with this article in mind.